29th of September 2020 Day to fight against food waste!

29th of September 2020 Day to fight against food waste!

Today, for the first time in history, we celebrate the United Nations Day to Eliminate Food Waste! The worldwide campaign aims to raise awareness among the public about the negative consequences resulting from wasting food. As a part of the Elimination Day, To Good To Go conducted a monthly educational campaign showing the scale of the problem related to the huge amount of wasted food. North Fish also joined the campaign.

Food waste has far-reaching consequences for our climate. As a result, it is estimated that as much as 8% of greenhouse gas emissions are caused by wasted food. Overproduction of food is one of the main environmental challenges we are currently facing. The fight against food waste has become one of the main UN objectives on the way to reducing and combating climate change. Target 12.3 includes halving by 2030 the global volume of food waste at the level of retailers and consumers and reducing losses at the production and supply chain level. And there is something to fight for! Every second 51 tons of food lands in the basket, which can be translated into an astronomical $1.2 trillion a year.

As part of the educational campaign organized by Too Good To Go, North Fish has published posts on its social media channels, where users have seen incomplete pictures in which 1/3 of the delicious dish was intentionally covered up. Moreover, as part of the campaign on the streets of Warsaw or Cracow one could come across advertisements where 1/3 of the delicious dish was “wasted”.  The campaign was also attended by well-known Polish influencers.

As the creators of the campaign describe, “the idea of covering 1/3 of the logo is in our opinion the best form that will emphasize the scale of the problem we are facing. Nothing affects our perception as much as depicting what we are talking about. With such an action we want to point out that wasting 1/3 makes no sense. By educating the society and raising awareness of the problem we can make a small contribution and make more and more of us act in the spirit of “zero food waste” every day. We believe that by small steps we will achieve the goal set by the UN and reduce the amount of food wasted and greenhouse gas emissions”. – Anna Kurnatowska – Country Manager Too Good To Go in Poland.

– All data on the scale of wastage and emissions are from Movement, 2020

– Too Good To Go application blog 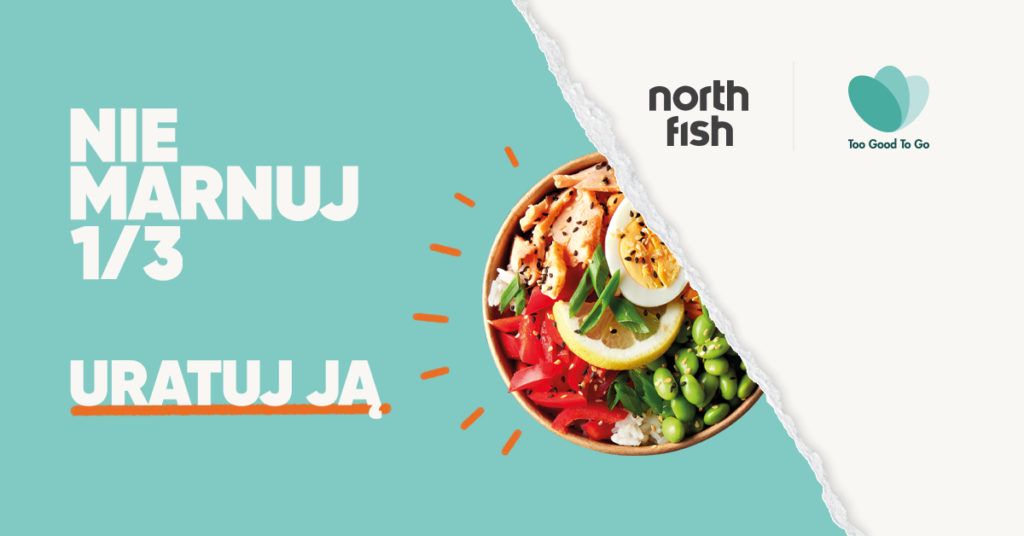 North Fish is a chain of restaurants specialising in fish, seafood and vegetarian dish. The first was opened in 2002 in the Galeria Echo shopping centre in Kielce. Currently North Fish operates 45 restaurants located in Poland’s best shopping centres, which makes it the country’s unquestioned leader and Europe’s second largest, chain of restaurants offering fish and seafood. Each day nearly 1,000 employees take care to ensure the highest quality of the products served.